I’ve always wondered whether drafting first mattered in my fantasy football draft. My leagues are always drafted with the snake draft. For a 10-team league the draft order goes 1-2-3-4-5-6-7-8-9-10-10-9-8… The 10th team has the last draft position but does get their two draft picks right next to each other so the question becomes is drafting 10th and 11th better than 1st and 20th. Finally, I got tired of simply assuming 1st was not as good as my preferred 10th spot and I looked at the data.

I started by pulling the NFL player stats from yahoo.com and plugging in my league’s scoring system. After that I coded in a “greedy” strategy in which each team picks the best the player available subject to what positions they need to fill. I also assumed each team would use the same ranking system for determining player value and then I simulated a snake draft for 2013, 2014, and 2015. Here are the year end results for each team. 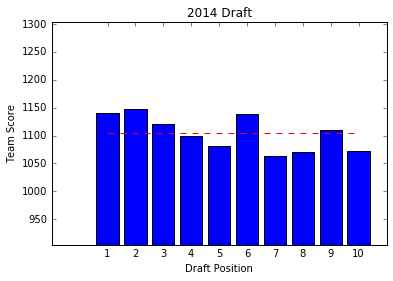 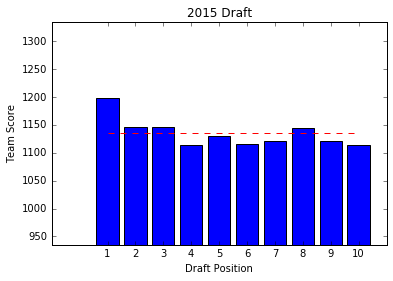 It appears that drafting first is definitely an advantage if each player uses the same ranking system. It would be interesting to allow players to play forward looking strategies and apply some evolutionary game theory. For example: I know this team needs a WR, this is the last “good” WR, and they are drafting before me so I need to get my last one earlier than I would like. Another consideration would be to remove the assumption that each team has the same ranking system. A model could add small noise to the expert prediction and then have some teams that just autodraft on yahoo.

I hope to add a follow up post detailing some of these additions and applying this to different sequential games. If anyone has literature on this, wants to help out, or just some general comments please comment or mail me at person@ergosum.com