Everyone thinks the NBA is rigged and it’s definitely been true in the past with the 2007 NBA Betting Scandal. But with last nights final’s game many questionable fouls were called in the first half and the issue on everyone’s minds. 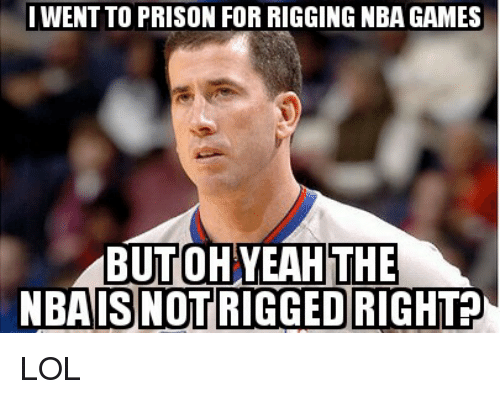 Last night I was talking with some friends and decided to actually look at some data.

For this analysis I have data personal fouls by team in the NBA Playoffs for the last 5 seasons (411 games). I separated the dataset into two by looking at teams that have the opportunity to clinch the series. For example: last night the Warriors were 3-0 against the Cav’s so they have the opportunity to clinch the series. I did not count 3-3 series because the incentive to prolong series is gone (but different incentives for rigging are still there).

Already we can see that teams with a clinching opportunity look to have more personal fouls (subjectively callable by referees). When I looked at some summary statistics I found the mean of teams with clinching chances to be greater than those who don’t.

Plugging these values into a hypothesis tester I found that there is a 95% statistically significant difference in personal fouls based on clinching chances. The team with a clinching chance has a greater mean than the teams that don’t have the opportunity to clinch.

NBA teams that have the opportunity to clinch definitely receive more personal fouls. This is encouraging to suggest that the NBA is rigged however there can be a number of other factors that contribute to this result. A couple of examples of stats that weren’t accounted for: home/away, typical fouls by team, referee crews, and foul types. If anyone has more complete information on the type of fouls called that would really help. As well as more history. Needless to say, I think there is rigging in the NBA — intentionally or not.

To know for sure the book Mastering Metrics does a great job talking about how to account for confounding variables in observational studies. For my sake, I’m sold that the NBA is rigged and will add a isClinching flag to all my NBA betting models.

2 thoughts on “Is the NBA Rigged? Analysis of Fouls in Clinching Games”